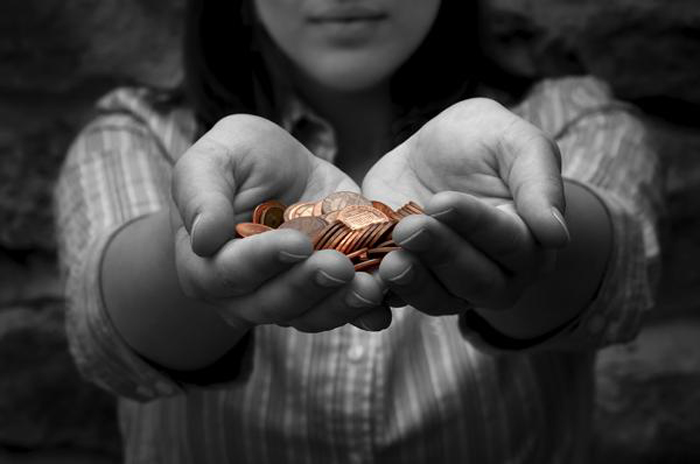 Buddhism views charity as an act to reduce personal greed which is an unwholesome mental state which hinders spiritual progress. A person who is on his way to spiritual growth must try to reduce his own selfishness and his strong desire for acquiring more and more. He should reduce his strong attachment to possessions which, if he is not mindful, can enslave him to greed. What he owns or has should instead be used for the benefit and happiness of others: his loved ones as well as those who need his help.

When giving, a person should not perform charity as an act of his body alone, but with his heart and mind as well. There must be joy in every act of giving. A distinction can be made between giving as a normal act of generosity and dana. In the normal act of generosity a person gives out of compassion and kindness when he realizes that someone else is in need of help, and he is in the position to offer the help. When a person performs dana, he gives as a means of cultivating charity as a virtue and of reducing his own selfishness and craving.

In some Buddhist cultures, it seems to me that there is a belief in merit being earned by dana or giving.
But personally, I think that if one gives with an expectation of merit then it is not done in a fully wholesome manner. I see the natural blossoming of mudita (sympathetic joy) as the true realization of giving selflessly.

So why do I speak of this today, and to what end?
Well, because I not only feel that I do not give enough, but that also I often do so with some form of expectation.
One small example would be my determination in being a Vegan. I do so because of my intention to eliminate suffering, but I also have a wish to convince others to do so. These thoughts that are compelling me to share my compassion with others are self motivated. “I” want other people to understand. “I” want other people to stop hurting and killing animals.
This is not Right View, nor Right Action, nor Right Intention in my opinion.

If any of us, the self included, are to give selflessly without expectation or reward, then it must be done with the complete destruction of the “I”.
This, I know, for most of us appears as a huge mountain to climb. But even the highest mountaintops are reached with mindfulness and strong determination.
And while we may slip and fall on occasion, I believe that we are each fully capable of reaching the summit.
We only need take that first step, and give.

The attachment to giving

How much to give yourself

← Go on, be happy!
Next life progression →