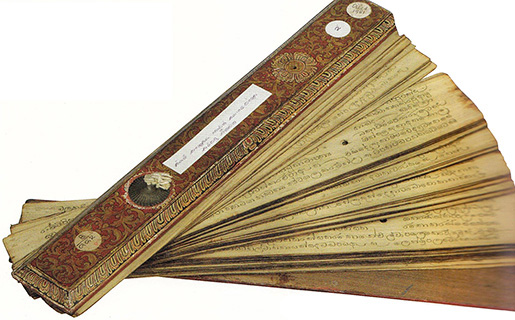 (1) Event; a phenomenon in and of itself; (2) mental quality; (3)
doctrine, teaching; (4) nibbāna. Also, principles of behavior that
human beings ought to follow so as to fit in with the right natural
order of things; qualities of mind they should develop so as to realize
the inherent quality of the mind in and of itself. By extension,
“Dhamma” (usu. capitalized) is used also to denote any doctrine that
teaches such things. Thus the Dhamma of the Buddha denotes both his
teachings and the direct experience of nibbāna, the quality at which
those teachings are aimed.

Intentional acts that result in states of being and birth.

Literally, “thread”; a discourse or sermon by the Buddha or his
contemporary disciples. After the Buddha’s death the suttas were passed
down in the Pali language according to a well-established oral
tradition, and were finally committed to written form in Sri Lanka
around 100 BCE. More than 10,000 suttas are collected in the Sutta
Piṭaka, one of the principal bodies of scriptural literature in
Theravāda Buddhism. The Pali Suttas are widely regarded as the earliest
record of the Buddha’s teachings.

Compassion; sympathy; the aspiration to find a way to be truly helpful
to oneself and others. One of the four “sublime abodes” (brahma-vihāra).

Loving-kindness; goodwill. One of the ten perfections (pāramīs) and one
of the four “sublime abodes” (brahma-vihāra).

Equanimity. One of the ten perfections (pāramīs) and one of the four
“sublime abodes” (brahma-vihāra).

Appreciative/sympathetic joy. Taking delight in one’s own goodness and
that of others. One of the four “sublime abodes” (brahma-vihāra).

Mental cultivation or development; meditation. The third of the three
grounds for meritorious action. See also dāna and sīla.

Mindfulness, self-collectedness, powers of reference and retention. In
some contexts, the word sati when used alone covers alertness
(sampajañña) as well.

Concentration; the practice of centering the mind in a single sensation
or preoccupation, usually to the point of jhāna.

Clear intuitive insight into physical and mental phenomena as they
arise and disappear, seeing them for what they actually are — in and of
themselves — in terms of the three characteristics (see ti-lakkhaṇa)
and in terms of stress, its origin, its disbanding, and the way leading
to its disbanding (see ariya-sacca).

“calm abiding,” comprises a suite, type or style of Buddhist meditation
or concentration practices designed to enhance sustained voluntary
attention, and culminates in an attention that can be sustained
effortlessly for hours on end. Samatha is a subset of the broader
family of samādhi (“concentration”) meditation.

Transmigration; the round of death and rebirth.

On the conventional (sammati) level, this term denotes the communities
of Buddhist monks and nuns; on the ideal (ariya) level, it denotes
those followers of the Buddha, lay or ordained, who have attained at
least stream-entry (see sotāpanna), the first of the transcendent paths
(see magga) culminating in nibbāna. Recently, particularly in the West,
the term “sangha” has been popularly adapted to mean the wider sense of
“community of followers on the Buddhist path,” although this usage
finds no basis in the Pali canon. The term “parisā” may be more
appropriate for this much broader meaning.

Liberation; literally, the “unbinding” of the mind from the mental
effluents (see āsava), defilements (see kilesa), and the round of
rebirth (see vaṭṭa), and from all that can be described or defined. As
this term also denotes the extinguishing of a fire, it carries the
connotations of stilling, cooling, and peace. (According to the physics
taught at the time of the Buddha, a burning fire seizes or adheres to
its fuel; when extinguished, it is unbound.) “Total nibbāna” in some
contexts denotes the experience of Awakening; in others, the final
passing away of an arahant.

Giving, liberality; offering, alms. Specifically, giving of any of the
four requisites to the monastic order. More generally, the inclination
to give, without expecting any form of repayment from the recipient.
Dana is the first theme in the Buddha’s system of gradual training (see
ānupubbī-kathā), the first of the ten pāramīs, one of the seven
treasures (see dhana), and the first of the three grounds for
meritorious action (see sīla and bhāvanā).

Buddhism by the numbers

← Chasing the self
A double dose of dosa →