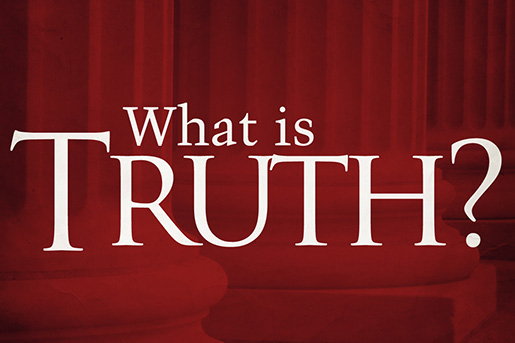 And what makes dhamma the truth?

Dhamma (Pali) or Dharma (Sanskrit) is actually the same word but in two different languages. In Buddhism it can have the following meanings:

It is also commonly understood that using the upper case version of Dhamma signifies the teachings of the Buddha, while a lower case version of dhamma indicates the ultimate truth.
With this in mind, it seems as though the ultimate truths can be revealed without being exposed to the teachings of the Buddha. And proof of that lies in the Buddha himself. Because the Buddha did not have any of the teachings that we all study, but only life experiences and personal insight and observation. And, in achieving enlightenment, the Buddha initially doubted that he could even convey or teach what he had discovered because of this very reason. Our own experiences, inner observation, and skillful determination are perhaps far more potent in terms of discovering the truth about this life. But this post is not about whether or not anyone should read or study the teachings of the Buddha, it is about the truth; the absolute truth.

So is my truth the absolute truth and yours is not? Is my “religion” the only one with the actual truth?
I think the truth actually outweighs and extinguishes all religious and ideological doctrines and dogmas. And I say this with a great deal of confidence and equanimity, because the word truth itself means “in accordance with fact”. Not opinion, belief, or superstition, but one hundred percent factual reality. Just one small example of this is the Buddha’s teaching of the First Noble Truth, that there is suffering. No living being can deny this as being the truth. And doesn’t one universal truth, the only truth, truly unify all of us and break down any walls of illusion that may exist?

So what this truth, what revelation am I going to share with you today? Well as much as I would love to tell you that “it’s for me to know and you to find out”, I am still discovering the truth for myself. Little by little, using personal observation and accepting the nature of this existence with far less clinging and desire than in the past. And I am not sure that the kind of wisdom that I’m talking about can come about in any other way than through time and patience. And admittedly, it has been aided ever so greatly by the teachings of the Buddha. The dhamma has put me on the right path to the Dhamma. Like the saying goes, the Teacher can open the door, but we must each walk through by ourselves.

In closing, I would ask each of you to consider just one of the truths that I have discovered through my practice. That is the truth of being completely connected to one another. Every living being, every living thing, are all that we are. Not just philosophically, but in truth and reality. But this too is for you to discover through your own direct experience.

May you each be well, happy and peaceful.

The Essence of Dhamma

Tell me the truth

In the beginning there was light