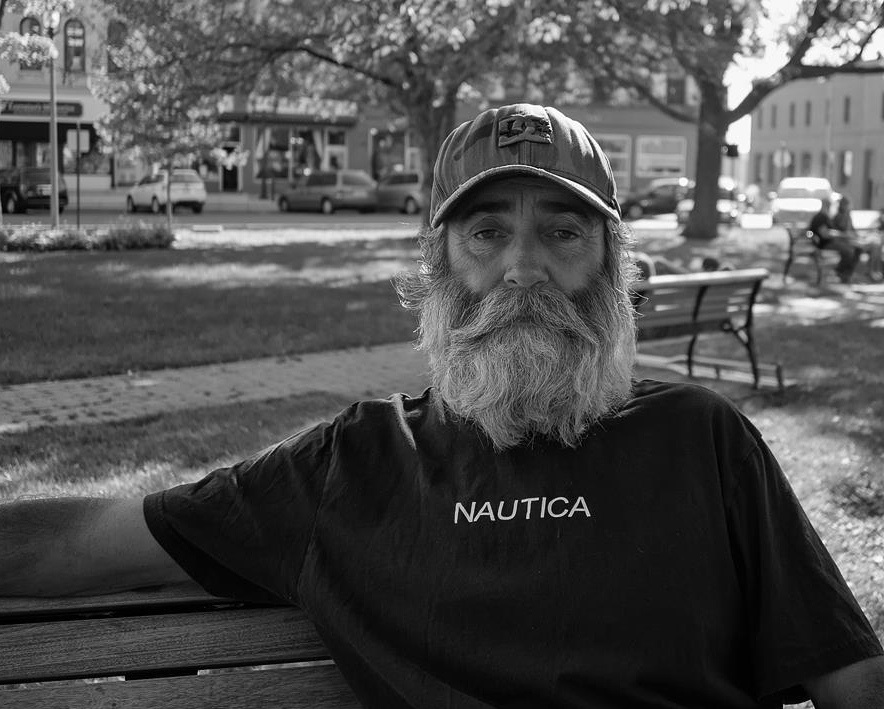 I think we all make judgements so easily and quickly sometimes. I certainly fall prey to it myself more often than I am proud to admit.
The area that I happen to work in has a large homeless population, and over the years I have spoken to and photographed many of them (I love doing street photography). I’ve heard many of their stories, many of which have a very similar ring to them. Alcohol got a grip on them and destroyed their Family and ultimately everything else of value in their life.

The other day, a homeless man was lingering outside my business front door. I had never met him before, and my Wife was a little nervous about his presence out there. Admittedly, his look would make many of us feel slightly nervous. Rough, bearded, dirty and hooded with a hardened appearance on his face. But shortly after unlocking the doors, he came in to speak to me. He told me that he just wanted to warn me about another homeless man. He said the guy was very drunk and was planning on coming into my store. He knew this could result in a problem and potential damage to my merchandise, so he just wanted to give me a heads up that the guy was potentially dangerous.
I immediately felt the gravity of any preconceived notions that I had for this man. His intention and purpose was purely noble, and he only wanted to help. He never asked for anything, just quietly let me know and said goodbye. I of course thanked him so much for warning me.

Sure enough, later that day, the man he spoke of came into my store. He could barely stand up straight and was obviously extremely drunk. I let him look around, but when he asked to touch some expensive items I told him that was not such a good idea. He got fairly perturbed we me at that point and after several expletives left the store. I was really grateful that the other homeless man had been so kind as to warn me or I might not have handled it as well as I did.

Later that afternoon I walked across the square to get some food, I saw the man who had forewarned me. I stopped to chat for a bit, and to thank him again for the heads up. He seemed like a very nice person, and if he was drunk it did not show. He explained he has lived in this town his whole life, his family is all here and he knows everyone. I was more than bewildered by this, but did not want to pry too much into his past. At one point he began talking about another homeless man who I have come to know over the years. He told me that year after year this other man spirals downward more and more. We both agreed how sad this was. And then I paused to ask him a question that really weighed on me. I asked, “how do I really help someone like him. How do I truly help someone like you?”.
There was a long silence from my new friend. He finally looked at me, and with complete sincerity in his eyes, he said “you can’t”. He went on to explain that we all make our own path and are responsible for ourselves. If we want to change our circumstances then it’s up to us and nobody else.

I think that far too often we all tend to see the problem with others. Looking inward can expose a lot of questions, frustrations and fears. But truly the only way to make progress on this path of life is to not concern ourselves with others behavior or actions and spend more time loving and accepting ourselves. Our weaknesses only prove that we are human, and are subject to the Three Marks of Existence. Those three being impermanence, the insecurity of life, and the absence of any sort of permanent self. And while I too struggle with completely absorbing the deep understanding of these, it is a big part of my daily practice.

We are all works in progress, and at different points on the road. And all living beings share this common thread that binds us together in a greater way than we can always see clearly. The baby steps still hold true today as they always have. First we must love and accept ourselves. And only then do we have pure love, kindness and compassion to share with the World. You can’t fix anyone else, but you can always help yourself.

← Why I’m important
The man behind the mask →