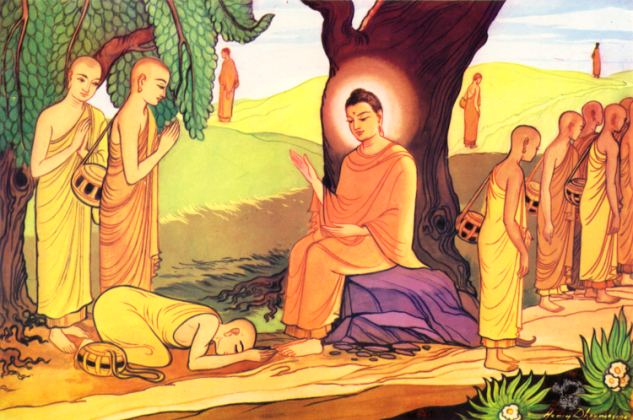 Bhante Sanyatha was trying to explain this to me recently, but had some difficulty translating the Pali into english words that would properly convey the teaching.
So off I went in search of explanations via the web. I found a lot of sutta’s that “kind of” talked about this, but not one that actually clarified it for me.
Often I have been told by several of the Monks that it is all dhamma. Meaning that everything we do, say or think is the path of wisdom and potential Buddhahood.
But I think that seeing through the eyes of the dhamma is different than that. I think it is about completely changing ones view of all things. Without pervasions or distortions (vipallāsa), but with the heart of a Buddha.
I see equanimity (upekkha) as a key to obtaining this view, but I also know that this word equanimity is thrown around with careless abandon. I think that true equanimity comes from an egoless being. With acceptance, patience (khanti), and non-attachment, there is a place of peace, loving kindness (metta) and compassion (karuna).

I have not gained the skill or wisdom to see things in this way, but I practice for this purpose. Strong determination, tempered by acceptance of my human nature, will always bring me back to the middle path.

I have no idea which Jhana I have reached, nor am I concerned with it.
But to reach a place that is purity of equanimity and mindfulness, with neither-pleasure-nor-pain, is one which I believe to be Noble and wise.

“I declare a person endowed with four qualities to be one of great discernment, a great man. Which four?

“He attains — whenever he wants, without strain, without difficulty — the four jhanas that are heightened mental states, pleasant abidings in the here-&-now.

“With the ending of mental fermentations — he remains in the fermentation-free awareness-release & discernment-release, having directly known & realized them for himself right in the here-&-now.

“…I declare a person endowed with these four qualities to be one of great discernment, a great man.”

What is the Dhamma?

Have a great moment